Skip to content
â€œThe strange chicken with many wings and legsâ€ and â€œThe chicken contains hormones grows up so fastâ€... At present, these sayings in the society have caused consumers some degree of panic. Yesterday, the China Animal Husbandry Association announced a third-party test result at the â€œBroiler Breeding and Consumer Safetyâ€ forum held in Beijing. Sample tests in Beijing, Shanghai, and Shanghai showed that chicken meat does not contain hormones. The communityâ€™s concern about hormones in chicken meat is Unfounded.

>> Samples of chickens in the three major cities are hormone-free. â€œTraditional domestic chickens will take 21 days to transform from eggs to chickens, but today's broilers grow ridiculously fast.â€ Some consumers expressed their suspicions online. Compared with the long-term growth cycle of traditional chickens, the rapid growth rate of broilers also caused some consumers to worry about it. The idea of â€‹â€‹raising chickens and using hormones is spreading wildly.

For this reason, the China Animal Husbandry Association entrusted the Chinese Academy of Inspection and Quarantine to conduct a comprehensive qualitative and quantitative inspection of the hormone content in China's fast white broiler chicken products from November 09 to November 23, 2010.

The China Academy of Inspection and Quarantine has detected hormone levels in 27 chicken samples from supermarkets, farmers' markets, and KFC restaurants in Shanghai, Beijing, and Guangzhou. The types of hormones tested include precocious puberty and may have increased fat content. There are a total of 32 kinds of estrogens, progestins, synthetic steroids, and zearalanols that have carcinogenic effects.

The China Animal Husbandry Association stated that the test results are based on scientific data that: Chicken does not contain hormones. There is no basis in the community for fear of hormones contained in chicken meat.

>>Reasons that hormones help somatotropin do not promote growth and increase mortality. "Consumers' perception of the use of hormones to promote broiler growth is a huge misunderstanding," said Shen Guang, secretary-general of the China Animal Husbandry Association.

Zhang Hongfu, a researcher at the Institute of Animal Husbandry and Veterinary Medicine, and a deputy director of the State Key Laboratory of Animal Nutrition, said that no hormones have been found in broiler breeding in China and even in the world. Hormones are expensive, the technical requirements for the use of supplements are complex, and the addition of hormones is forbidden in China and the world. More importantly, studies at home and abroad also show that adding hormones has no effect on chicken growth, but also increases the risk of heart disease and ascites in broilers.

Five factors that make broilers grow faster The rapid growth of broilers experts said that large-scale farming has ensured the safe production of broilers, and it has also greatly increased the growth rate of broilers. Wen Jie, the chief scientist of the National Broiler Industry Technology System and Deputy Director of the Institute of Animal Husbandry and Veterinary Medicine at the Chinese Academy of Agricultural Sciences, said yesterday that the reason why broilers grow fast and slaughter early is mainly due to the following five factors:

First of all, thanks to continuous optimization and improvement of chicken breeds, many domestic and foreign breeding companies and scientific research institutions have continuously cultivated new varieties with excellent characteristics, such as large size and rapid growth.

KFC used the â€œspider chickenâ€ Yumâ€™s executives to call it a science fiction novel. Currently, KFC and McDonaldâ€™s are used on the Internet to use â€œspider chickensâ€, and KFCâ€™s chicken factory specializes in raising these to produce 6 chicken wings and 6 wings.â€ Spider chicken."

â€œThe website says that KFC is doing this kind of thing. This is completely nonsense.â€ Wang Quan, KFCâ€™s parent company Yum Wangâ€™s related person in charge in China, said in an interview yesterday that, first of all, KFC is a catering company and the company does not participate in raising chickens. . From other aspects, this absurd strange chicken statement is also no scientific basis. Because from a scientific and technical point of view, no one in the world can really do it, let alone mass production.

Shen Guang also said that he himself has seen pictures of "spider chicken" in his computer. "This is entirely computer-generated and it is impossible to produce such a situation, contrary to the laws of nature."

â€œI also inquired about this matter to my American colleague. This thing was probably transmitted more than ten years ago. It was rumored to be rumored. There is absolutely no factual basis.â€ Wang Qun said, â€œProbably some People watched science fiction think of such things." 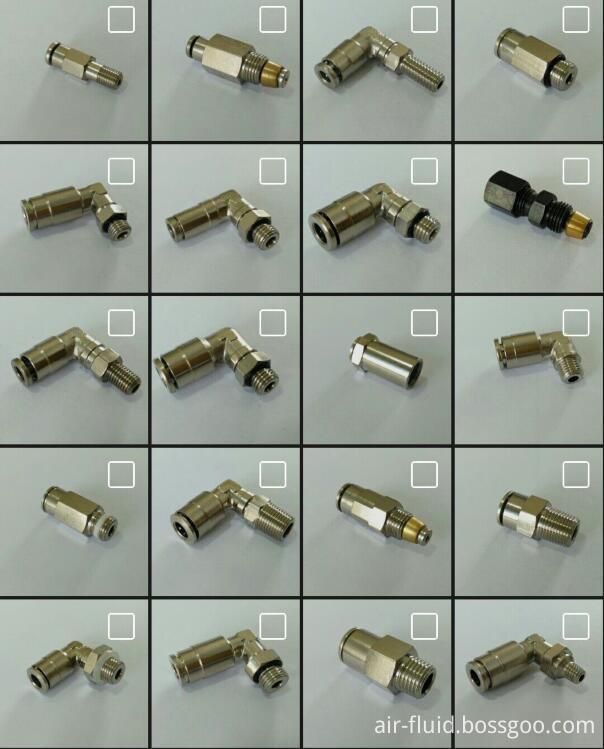 The Ningbo  Air-Fluid BSPT Thread Brass Nickel-Plated Push in fittings with slot structure on Brass Collet is,which is milled by Auto-CNC Machines to assure the even distance between the tooth to tooth. This way can guarantee the precision & sharp claw to catch the tube hose firmly & steadily.


The Tee Connector ,Elbow ,Y Connector and Banjo Fittings are being forged with high compactness to avoid the space inside the solid fittings' body, The Polished Surface Treatment on the Forged fittings to wipe off the burr, spot and oil,the good character is the high adhesive power of nickel plating on its Surface.